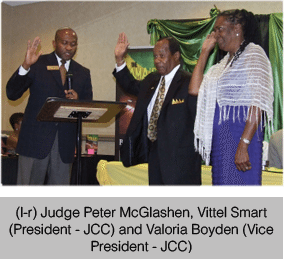 Orlando, Florida, June 1, 2014 – Newly installed President of the Jamaica Cultural Connection (JCC), Vittel Smart, has urged Jamaicans living in Central Florida to embrace the “spirit of cultural unity and connectivity” in an effort to enhance the quality of life for Jamaican communities.

Smart who made the appeal at the recent inauguration ceremony of the JCC, pledged to move the three year old organization to the  next level.

“The necessary steps are being put in place for  streamlining and re-branding our organization  and for openness, transparency and  accountability at all levels. I also intend to work diligently to make this organization very  proactive in fulfilling its mission,” he said.

In making reference to the work of the JCC, the President said some of the primary  objectives include – helping to provide better health care services for the needy; feed and  clothe the less fortunate and building a sense of spirituality and morality among  members in communities served.

The inauguration of Smart and the other officers of the JCC was conducted by Volusia  County Court Judge – Peter McGlashen and Orly Burey – the candidate for the 9th  Judicial Circuit Judge.

At the end of the formalities, Bryan signed copies of his book – “The Jamaicans –  Children of God in the Promised Lands” – that chronicles the success of Jamaicans in the Diaspora. The authors of two other publications – “Ode to Miss Lou” by Susan Lycette Davis (Dr. Sue) Sufferers Manifesto by Owen James – were also on hand to autograph copies of their books.

Founded in October 2010, the JCC was the vision of Jamaican, Claudette Bailey. It came into being based on a need for Jamaicans to come together and help the poor and the destitute in Central Florida and their homeland. The slogan for the Jamaican Cultural Connection is: “Where Together We Build On Heritage.”